Who is Medicine Baba?

There are various ways to show compassion. For the needy and poor in Delhi, it takes the form of free medication gathered by elderly Omkar Nath Sharma. This 85-year-old man, affectionately known as "Medicine Baba," marches throughout the capital every day, asking for unwanted medications from those who can afford them and then giving them to the poor. Omkar has devoted the previous 15 years to this cause despite having a physical limitation of 45%. At least Rs. 5-6 lakh worth of medications have already been gathered and distributed by him each month.

Onkarnath Sharma embarked on his work as a medicine baba in 2008 after seeing the collapse of an under-construction bridge for the Delhi Metro in East Delhi. Numerous people reportedly suffered injuries, and two people lost the fight of their lives. After administering first aid, the authorities sent the injured person home with additional care because they couldn't pay the care expense. The event marked a turning point in his life and affected him so much that he resolved to prevent a repeat.

At Sayog, we treasure such individuals and salute their efforts proudly. That is why we have teamed up with Medicine Baba to help him expand his reach and reap the benefits of the infinite potential of the internet.
Please help us Help the Medicine Baba efforts; make your contribution, and reach out today. 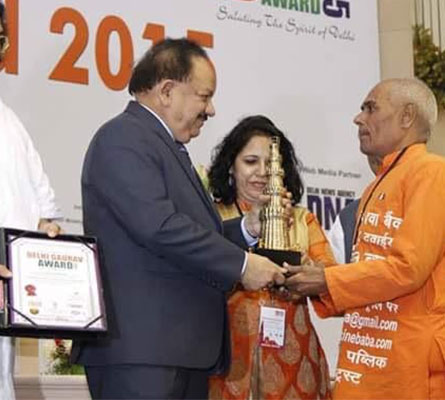